From November last year until February 2014  I was working with Nottingham Contemporary’s Get Involved project. With the help of the young people and Sian and Alice I was commissioned by the group to produce an animation to be used as part of an installation for their Collabor-8 night held at the Gallery. 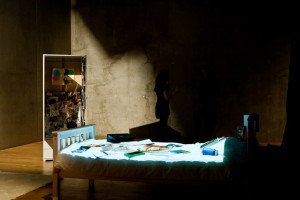 I worked with pupils from Outwood Edge Primary School in Loughborough, we used a picture by Patrick Hughes to inspire our work. His work used three dimensional paintings to play with perspective, we then built our own individual model rooms. We added personal touches and then put them all together to make one large construction of the whole classes efforts. This final stage was a spontaneous development by the class, carried out without prompting.